Skip to content,,en,Welcome to the lands that gave shelter to the famous Bandolero Jose Mª "El Tempranillo,,es
Home » Church of Our S ª of the Incarnation (Casariche) 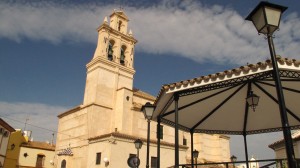 The parish church of the Incarnation was built by the Marquis of Estepa in the seventeenth century, the 13 June 1676 according to the inscription at the foot of the baptismal font. This church has a building with a single nave with Latin cross interior chapels between the buttresses. The nave is covered with a barrel vault and transept with semicircular dome on pendentives decorated with radial. It was renovated in the s. Century and reconstructed at a later date the belfry and a small chapel decorated disappear with rich plasterwork of s. XVIII. The main altarpiece consists of a bank, a separate body for 3 streets and an attic. The main body is occupied by the patron, Our Lady of the Incarnation, coming out in procession on the evening of Easter Sunday; Castillo's work Lastrucci. The altarpiece is from the former convent of the Victory of Estepa. Other important images are: Nuestro Padre Jesus Nazareno anonymous author and the last third of the seventeenth century, Our Father Jesus Captive, and Our Lady of Sorrows, works both the Sevillian sculptor D. Antonio Castillo Lastrucci. Our Lady of Hope, Juan Antonio Gonzalez Ventura (1993), the Christ of the Expiration, anonymous author and the holy burial, of the late nineteenth. The relative sizes currently, is because as, in many other places, were destroyed during the Civil War, which caused that they had to order new sizes. In the sacristy are still some pieces of jewelry carved late s Córdoba. XIX