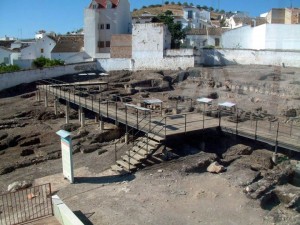 Alameda The Roman Baths are a reservoir located in the urban, within a wide lot about 3.000 m2 known as Garden of the Nuns. In 1.981, the site comes to light as a result of a land movement that occurs in this plot for construction of a new building. In 1.983 are made new digs framed within the Provincial Plan HE Archaeology. INEM Malaga Provincial Council, structured in two stages, a first excavation of the remaining portion of the site and other restoration and consolidation of the thermal, fenced, etc ... 1.984 campaign raises an exhumation of the share of silos Chalcolithic. In 1.986 takes the expropriation of the land where the reservoir extends from the Andalusian. In 1.987 are declared as a Cultural, and happens to have a comprehensive protection. Currently this resource is on value for tourist use, counting on a Center Annex, where you can discover the pormenosres of this type of construction and its use in Roman.

The basic structure of the Baths consisted Costume, hot room, warm and cold. Although always clearly separated from the bathroom area. The first of the rooms with which we are in the spa is the apodyterium or clothing, where they stripped those who were to take baths, a room with benches and cupboards to deposit clothing and access, through different doors, the rest of the main rooms of the building. The most important were three: the hot room (caldarium), the warm room (tepidarium), and the cold room (frigidarium). The first two rooms were available to central heating room, through the hot air circulation under ground and between the walls. They placed a pylon (alveus) hot and warm water respectively. Frigidarium was similar in structure with the exception that the water contained in the battery was cold temperature. Along the caldarium could set other types of environments called laconicum, where it would take steam baths. There were two ovens, one that supplied the warm room and a hot room to. These furnaces were few rooms for generating heat by means of bonfires. This heat is driving through some corridors to the hypocaust, it was a room attached to the rooms, a kind of basement that stored heat to extreme temperature, and served, and the embroidery, to heat rooms for public use. In oven, also placed a bronze boiler where the water was heating the pylons located in rooms (caldarium y tepidarium).

The baths were one of the most attractive and frequented by the Romans, preferred over others as a meeting for all classes. Worth very little input, becoming free periods (paid for by a wealthy citizen, political etc. ..). The schedule used to be a half-day(when the water was hot and heated rooms) into the night.

Visiting this site is complementary to the Topic Centre visit the Roman Baths.