Skip to content,,en,Welcome to the lands that gave shelter to the famous Bandolero Jose Mª "El Tempranillo,,es
Home » Silos and Chalcolithic Necropolis (Alameda) 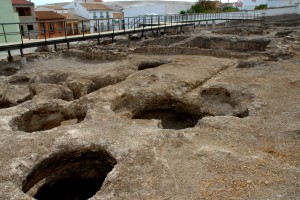 In the same field in which we find the Roman baths of Alameda, are located remains about silos calcolithic, dated the Third Millennium BCE. The functionality of these silos can be diverse, Solian be viewed both as places of storage, of funerary use or even room, and multiple secondary purposes are difficult to pin.

These structures are still shrouded in a certain aura of mystery, as its actual performance is complex. It is possible that in a principle it were dug wells and connected by surface channels, although it is not negligible possibility that served initially as authentic stores to store all sorts of things, grain, tools, pottery or needed to return to the village at the next station. The populated would consist of circular huts in ovaladas, with a single door and walls and roofs made of branches and mud that were supported on stone foundations and plinths also locked with mud. Erosion, then built buildings on site and agricultural tillage have removed these remains, just so that we can see now the "basement", very heart and stomach of the town in which tools are located, fragments of vessels and other rights abandoned by its inhabitants when it was dismantled.