Skip to content,,en,Welcome to the lands that gave shelter to the famous Bandolero Jose Mª "El Tempranillo,,es
Home » Renaissance on the Genil Bridge (Benamejí) 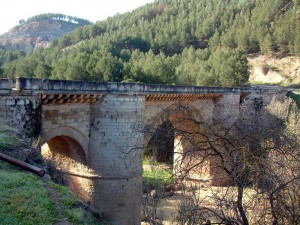 It is a project of the Renaissance architect Hernán Ruiz II among all engineering works, this is the only example of new plant fully executed by himself. Its value is the most remarkable piece of engineering that responds to exemplary Renaissance rules Geometry, composition, proportions and near nudity ornamental.

It is a bridge XVI century, spanning the course of Rio Genil following the old path of Antequera. It is located on a stretch of road old from Cordoba to Malaga (CN-331),between the municipalities of Benamejí El Tejar.

Together is revealed as a design of tradition medieval, although proportions that adhere to concepts Renaissance. The board is located about twenty feet above the river level, maintaining substantially horizontal path tracing in this area, despite deep channel.

The lateral arches, between abutments and piles, are semicircular and advancing on a line of fascia that runs the load-bearing. Having a light 88 dm and is slightly recessed thread. The central arch, DE30 m luz, is also midpoint, to start the water level and also recessed screw. At one point, grandesmechinales recognize one that is likely to anchorages for the construction cimbraspara. The three arches with a simple trasdosan molduraachaflanada.

The factory of the bridge is regular blocks, average size, well tilled and homogeneous color, fossiliferous stone. The parapet, lacking moldings and presents its chamfered edges, perimeter runs, both sides of the carriageway. On the road embankments widens, generating a kind of viewpoints or halts protected.