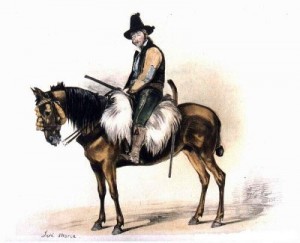 It starts with José María "El Tempranillo" what experts have called the romantic period of banditry Andalusian. He will be the prototype generous bandit who steals from the rich to give to the poor. His figure has become a myth and, as such, appears in romances, couplets, chapbooks, serials, novels, biographies, etc.; which has caused many inaccuracies and fantasies-even before his death- that have nothing to do with historical accuracy. All them is the result of the interest and admiration he had in life and still continues to arouse. His fame crossed borders of Andalusia and Spain and their exploits were known in England, France, Netherlands and the United States, through numerous foreign journalists and writers as Richard Ford, Prosper Merimee, Théophile Gautier o Adolfo Custine, inter alia.

José María grew up and lived his childhood and youth in clover, village in the municipality of Lucena (Cordova). Probably came from the foundling home in that city and was welcomed by the family Hinojosa Cobacho. This family was very humble, since his father worked as a laborer in the field. Nothing is known with certainty of childhood and adolescent years of José María, we assume that their activities were identical to those of his adoptive father, helping to keep the painful existence of a poor family in such tough years as the early nineteenth century. Never met the school, or if he did it was with little use, because it was uneducated.

Tradition tells us that in the early years of the decade of 1.820, a 29 September, holiday festival of San Miguel, there is a brawl, appear razors and José María killed his rival. As the murder was punishable by death, making a quick decision to take to the mountains. His first refuge seems to be the Serrania de Ronda, from which it may be devoted to smuggling Gibraltar, criminal activity that provided some additional income in poor economies of many inhabitants of the southern provinces of Cordoba and Seville and Malaga northern.

Soon as a party of men, among most notably Juan Caballero Pérez, alias "El law", Estepa natural; Jose Ruiz Germán, aka "The veins", Natural Badolatosa; and Francisco Salas, aka "The Tower", concuñado of José María. The brigandage and robbed traveler will be the main offenses, si bien, to say Quiros and Ardila:

"Jose Maria is the great innovator of the Andalucian countryside criminology, who establishes a more refined evolution within salteamiento practices. Try to always avoid violent procedures and blood of their victims, implementing the aforementioned custom of the tax charged to the traveler ".

This original and refined form of crime, Jose Maria implanted in the fields and roads Andalusian, is a kind of compulsory insurance for all travelers, so that none of those, that it previously acquired, harm will not be stripped of their property.

To know a little about their physical appearance, worth the words of Richard Ford:

"I was then in the full maturity of thirty-three years. Strongly built, was dedicated and able to cope with the suffering, all qualities of a great leader; but was short, had a squarely built and compact; his body was somewhat disproportionate to his legs, which were slightly bowed, indicating strength and activity; the left hand was shattered at being accidentally discharged a gun and having to heal itself during twenty-five days, past on horseback; her lips were thin and tight, willful expression denoting; gray eyes that showed an affable when he was happy, but suddenly were becoming restless, sparkling, with suspicion characteristic of birds of prey, upon learning habit born guilty and suspicious ".

The years 1.828 and 1.832 are the most important in his shoulder activity. Despite sides published by various authorities, in which are rewarded with succulent rewards to anyone who offers to facilitate their capture data, Jose Maria escapes a thousand times a police cordon. The disastrous policy of Ferdinand VII absolutist Spain resulted in a series of reactions of a liberal, anti-regime, who sought the restoration of the Constitution of 1.812: were military coups. José María collaborated on two of them uselessly, Manzanares and the Torrijos. The first occurred in February 1.831, directed from Gibraltar by Lieutenant Colonel D. Salvador Manzanares. The attempt failed after being defeated by the royalist forces near Estepona. The second attempt took place in autumn of the same year; it seems that José María agreed with General Torrijos to lend their support and attend the landing site, also planned from the English colony, although there are no documents that affirm categorically. Like the previous, this statement was a failure and he and his followers were arrested near Malaga.

The Andalusian countryside in the early years of the decade of 1.830 is cast in one of the worst waves of insecurity. It may be an exaggerated view which Théophile Gautier, which toured Spain in the early 1.840, left when we noticed which meant traveling our roads in those hard years:

"A trip to Spain is still dangerous and romantic company; have to contribute to the person, have value, patience and strength. At every step you risk life, and with as little inconvenience is encountered privations of all kinds, the lack of things essential for life, the danger of the roads, truly impractical for non-Andalusian muleteers; hot as hell, sun could melt the skull; also, have to deal with the rebels, Crooks and innkeepers, gente bribona, whose honesty will accommodate the number of carbines carrying one with them. The danger surrounds you, I follow, the above; only hear terrible stories and mysterious whisper (…).

The tenants of the terms of Antequera, Archidona, Alameda, Benamejí, Osuna, Hummock, Round and very long so, channel their complaints and pressure by local authorities, that do not have the human or economic to stop violence and extortion in their respective terms. And the embroidery, local justices sent their complaints to the Captains General, who arranged various measures to this end, such as careful control of population movements with implementation of passports, issuing orders authorizing the magistrates to the farmers in the use of weapons, sending infantry and cavalry troops realistic or even volunteer army, perks and rewards for those who aprehendiesen or provide information aimed at the capture of evildoers, etc..

Hay Verdaderamente wells datos regarding él, but we can point out that occurred on a specific date in the month of June 1.832, but as a simple act, but as a result of a process, of a series of consultations that widened in time for several months until final approval. Was negotiated behind the backs of government agencies at the whim of the king's will and was not granted exclusively to José María, but the three ringleaders of headings. Juan Caballero had a leading role in the negotiation, in which authorities intervened estepeñas. The fact was recorded in several documents (Real Orden, passports, Minutes of Council of Ministers, etc. ..)

As to where it occurred, again resort to oral tradition, tells us took place at the Shrine of Our Lady of Fuensanta and Guide, an ancient and beautiful chapel, located in a beautiful spot a mile Corcoya, dependent village Badolatosa. Bartolomé Calvo says he attended al act notary public Steppe D. Antonio Cecilio Sanchez, who read the pardon and restrictions that may arise for repeat offenders, and so he who raised notary deed as there happened, of all that was recorded in the clerk of Estepa. The amnesty was adopted by all members of the party, about forty men, except Venom, José Maria who apparently denied for trying to betray their companions delivering them to the authorities in exchange for saving his life. Venom tuvo a bad end, and he was sentenced to Garrote the 13 December 1.832.

The pardon is a radical, and can live as peaceful, without suffering inclement weather, without having to spend nights in vigil, without risking their lives every day. During these months knows and relates to people like D. Pedro Agustín Girón, Captain General of Seville and Marquess of Yellow; o Richard Ford, English traveler who befriended; o John Frederick Lewis, who was immortalized in a portrait made in the first months of 1.833.

Death of a generous bandit

Some historians said that Jose Maria was killed in Despenaperros, when escorting a stagecoach. These inaccuracies, that exist today in recent publications, be explained by a bad information and, above all, because José María "El Tempranillo" life has already become a popular myth, entering fully into the legend, in which reality becomes distorted and magnified everything related to his life and death.

The death of the most famous bandits occurred as follows. José María rides, with some of his men, in the vicinity of the Sierra de la Camorra, with their work of extermination of crime. It was Sunday morning 22 September 1.833. Indeed, thieves are in the area and looking pursued have sought refuge in the farmhouse of Buenavista, of kilometers from the Alameda. Until then about José María and his men. Sort recognize the farmhouse and, then, shoot one of his men, who is injured. Immediately, two more shots seriously injure José María. The attackers manage to flee to the mountains. Without delay the move to Alameda, where it is installed in one of the Inns of Granada Street, Posada de San Antonio. There he receives the medical care, but his wounds are mortal. He knows and therefore has to dictate his will and to receive spiritual assistance from the pastor. That same day died José María, surrounded in the bed of his old and faithful companions. The 24 was buried, with plain burial, in the old cemetery, Today the parish courtyard of the Immaculate Conception of Alameda.

His will was delivered to Jerome Orellana, scribe only Alameda at the time. Precariousness striking property of Jose Maria, though not too surprising, given its generous character. Anyway, it is curious that only two horses dispusiese, some goods more and a lot of loans that would never charge.

In some documents, it appears that the death of Joseph Mary not accidental or incidental crime, momentary outburst fruit of a murderer, but a premeditated by a circle of bandits who did not accept the radical change that occurred in the life of this character. With José María "El Tempranillo" mythical figure disappears generous bandit. After him, no one knew or put imitate his style. Finally touched the romantic era of brigandage Andalusian.

and author of the biographical book "José María, Tempranillo "