Skip to content,,en,Welcome to the lands that gave shelter to the famous Bandolero Jose Mª "El Tempranillo,,es
Home » Church of San Miguel (Palenciana) 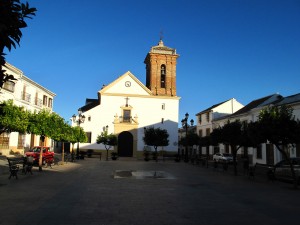 Dominating the hamlet of Palenciana is the parish of San Miguel, main monument of the town, occupying one of the fronts of the central square of Our Lady of Carmen. Already in the seventeenth century formed a chapel, that 1714 reached the rank of parish. But, by increasing the population, was necessary to build a new church in 1774, sufragándola the lord of the town and V Marquess of Benamejí. In two years it took from foundations and erected this building, magnificently beautiful and factory provided. It has a Latin cross plan with giant pilasters articulating their elevations, recesses making the shafts of such supports in the corners of the cruise, where also hang a bulky placados very jagged geometric profiles, all characteristic of eighteenth-century Baroque. Barrel vaults with lunettes serve covered, except in the central section of the cruise, wearing a ribbed dome.

Inside the church also stands the chapel of the Virgen de Araceli, that overlooks the gospel transept. It is a curved enclosure walls, elevation decorative pilasters supporting the cornice, very moved rhythms, enriched with angels and garlands of flowers. Cover with gallonada cupulita, also rich ornamentation. In the opposite arm locates the neoclassical chapel of the Virgen del Carmen, employer of the town. The aisles meet later extensions, carving first gospel side, to date 1878, date which holds the dome of the chapel of San Antonio. Of 1954 is the other ship with Chapel of the Sacred Heart, formed at the site of the old sacristy and patio. The exterior of the church is simple, but beautiful, noting especially the outer casing of the dome with brick pilasters, overlapping records compartmentalized. The gabled facade auction, front-side balcony and brick tower is a beautiful background to the set of the Plaza del Carmen.

Regarding the images, the two pieces are Palenciana flagship of effigies of San Miguel and San José, both of the second half of the eighteenth century and relatable to the circle antequerano. Next in interest is the image of the Nazarene, donated to the early nineteenth century, which has the particularity of being anatomizada and articulated to accommodate to recall different moments of the Passion. Most popular character is the size of Christ lying, also articulated for use in the Descent. The candlesticks of Solitude and the Virgin of Sorrows had done to 1830 and accuse the serenity that introduced the Passionist imagery academicism. Also in the first half of the last century are other Marian images, also dress, such as Virgen de Araceli and Our Lady of Carmen.