Skip to content,,en,Welcome to the lands that gave shelter to the famous Bandolero Jose Mª "El Tempranillo,,es
Home » Church of the Immaculate Conception (Benamejí) 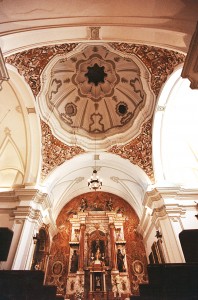 The temple, dedicated to the Immaculate Conception, was started in 1670 by the first Marquis of Benamejí, don José Diego de Bernuy, and terminated 1740 by the fourth Marquess Don Frederic Inigo, who gave it everything you need. The church tower, Mudejar is cutting eighteenth century, and has the square shaft. About him, octagonal body equal in width to the shaft, and another also octagonal, narrowest, with large bulge in mediating, and topped by a pyramidal spire. Eighteenth century also, and work of Don Inigo Fadrique, is the great chapel of the Shrine, circular plan with a beautiful dome. The altar of the parish is already neoclassical, mimic its wooden columns, rich marbles. To the right of the altar is the sacristy, ample and beautiful domes. On either side of the nave of the church open several chapels such as San Juan, Veronica, etc.. We can not leave behind the beautiful facade of this church. It has in the center the image of the Immaculate Conception, and at the base of the virgin several cherubs. It is also noteworthy that the shell found on the head of the Virgin, which is called Scallop. Highlights in the interior of this beautiful building, domes unique undulating rings in Cordoba baroque.