Skip to content,,en,Welcome to the lands that gave shelter to the famous Bandolero Jose Mª "El Tempranillo,,es
Home » Church of the Immaculate Conception (Alameda) 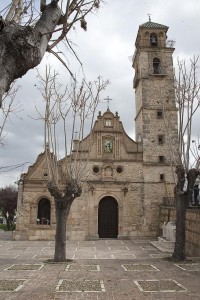 Is in this building, where the remains of the famous bandit who gives name to our destination. The temple was built late seventeenth century, subsequently adding tower. It was originally a Latin cross plant, wherein in its building blocks fosilófera limestone extracted from the nearby Roman Baths. At the head of the temple is the main chapel, in which there is a rococo altarpiece which houses a sculpture of the head of the parish, the Immaculate Conception. This chapel is covered with barrel vault, like the transept. In 1.767 Nazarene Brotherhood built to the left of the main chapel one dressing room, and this is one of the most treasured works of the temple, gallonada characterized by its dome and exquisite plasterwork and richly decorated in baroque style. In 1.779 seen the need to expand the temple, adding two aisles covered by vaults both esquifadas. The nave is of greater height than the side, communicating with them through arches, supported by eight huge columns. The exterior of the church is of stone and brick. Of note your front door, of blocks that form an arch on which two portholes open. Por su valor histórico artístico destacaremos la imagen de vestir de Ntra. Sra. María Santísima de los Dolores, de la escuela granadina, la de Nuestro Padre Jesús Nazareno, obra de Castillo Lastrucci de 1.940 and polychrome wooden Christ Crucified, s probably late. XIV.