Skip to content,,en,Welcome to the lands that gave shelter to the famous Bandolero Jose Mª "El Tempranillo,,es
Home » Source of Placeta (Alameda) 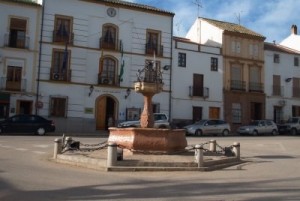 A mid eighteenth century was placed in the Placeta (Spain Square) a stone factory source antequerana, thatsupplied drinking waterfor more than two centuries population. Structure from a vertical monolith supports at its top a cup leaving four pipes or nozzles. The water falls into a pillar octagonal, who once served as a watering hole for cattle. Excess water was channeled to irrigate the orchards.

Also the source of drinking water supplied to the population, but the height of the pipes and the width of the pillar originated a unique way to fill the jars, by a hollow rod which is a funnel placed at the top, allowing water transfer to the containers.

Today is located in the center of town and with the passage of time has become a symbol of the town.