Skip to content,,en,Welcome to the lands that gave shelter to the famous Bandolero Jose Mª "El Tempranillo,,es
Home » Chapel of Our S ª of Fuensanta (Corcoya) 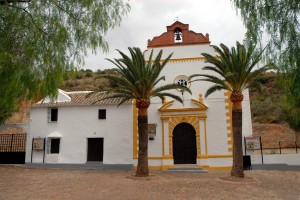 Chapel dedicated to the Virgin of Fuensanta, to which he began to worship in the year 1.383 after an apparition of the Virgin. At first he was in a small cave near the present hermitage, where was the image of the Virgin, currently the existing chapel was built in the mid-seventeenth century.

It appears that all shrines have been born three essential convergence circumstances. Being in the field, have appeared a picture in a cave or tree, and given also a fact that has attracted prodigious there large numbers of pilgrims.

The appearance of an image is easily explained: Christians hid them in places hidden to protect them from the desecration of Muslims in the Reconquest. And, before or after, a pastor, only one familiar with the intricacies who came to places as inhospitable, gave them. It is said that in 1.384, a neighbor of Badolatosa, looking for a doctor who was able to cure, happened in these parts and the Virgin appeared to him, he said as cure him of his ills; stream drinking water and bathing in it. He did and healed. I did not pursue, but returned to his people and said what happened between neighbors. Thereafter began the pilgrimage to the place, but the lady did not reappear.

A pastor of Alameda, Francisco Gómez, been observed that certain glow in casually mastic, when the day, 8 September of the same year, noticed that the glow increased in intensity, and approached, finding mastic between the branches of the current size of the Virgin. No fear gripped her, but he told the priest of his people, who with some companions went to the scene and took the picture to his church. They say that the Virgin disappeared from the temple and turned the mastic. They took then Badolatosa with the same result. Then he thought it would be his will stay there, and erected a chapel. Since, the faithful of Badolatosa, continued their journey to implore his protection and favors received thank. The original chapel was replaced by the current 1.671 built with funding from the devotees and the Marquis of Estepa.