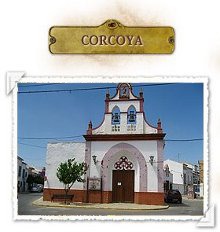 Corcoya in the municipality of Badolatosa, in the province of Seville, meeting to 132 kilometers from the capital. Corcoya is known in the region for the pilgrimage of the Virgin of Fuensanta that takes place on 7 a 10 September. It is believed that the name comes from “Kermes”, which is a kind of acorn meal is used for livestock, because of the people around there are many shrubs such acorn. It is a town of farmers, being the largest olive cultivation, and in particular the most abundant olive variety is the hojiblanca, collecting olive specialty dressing to both mill.

Is Corcoya small hamlet of Badolatosa it is about 6 kilometers of this, and now has approximately 500 people.

From the etymological point of view, appears that the name of this village headman comes from the term "Kermes", as the landscape where this had, in the past and even today, a wealth of coscojeñas, they are family scrub chaparral or oak that produces a bitter acorn called Kermes.

From the remains found in Corcoya (amphorae, columns, carved stones,etc.) we can deduce that in Roman times, several properties exploited this term. Even has appeared a cemetery, a few years ago, in the area called “The Lagunillas”.

Corcoya history as a people is closely linked to the history of the cult of Virgin Fuensanta, whose beginning is dated to the Middle Ages, the year 1384 when producing the discovery of the image of the Virgin. Another milestone would print his stamp on the history of the people would be the iron mines in the Sierra de la Cabrera, geodetic considered the highest point of the region. This mine operated at full production until years 20, until such time that sank ending the life of a 300 people. After this the mine reopened again. Between 1.890-1.920 Corcoya came to have a population of about 2.000 people.

The corcoyana cuisine is characterized by the abundance of local produce and pork, being very similar to that of other populations. Typical dishes include, the oil and gas, the gruel, the pringá, the fucking algamiteña, the carne sauce or meat from the slaughter. As for the pastry sopaipas highlights one of the more traditional breakfasts or snacks Township, and is the most typical dessert milk pudding.

The most important resources are to visit in Corcoya :

Church of Our S ª of Fuensanta

Chapel of Our S ª of Fuensanta