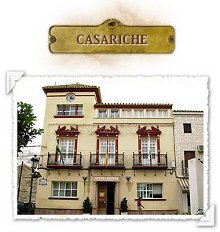 The town has a popular town 5.600 inhabitants and belongs to the province of Seville, being placed 125 Km. east of the capital, is likewise 100 Km. Malaga and to 100 Km. Cordoba, being well served by excellent roads with the three capitals. At the same time it is well connected with the localities of “Land José M ª El Tempranillo”, being 11 Km., 9 Km., 16 Km., 30 Km. and 35 km., the miles that separate municipalities Casariche of Cockaigne, Badolatosa, Alameda, Benamejí and Palenciana, respectively. Casariche is located on the railway line that runs from Cordoba to Malaga-Algeciras, in an area slightly wavy, olive trees and wheat fields dominated.

Casariche is a typical Andalusian village, appreciated by the tranquility of the streets and the hospitality of its inhabitants, being of great importancebandoleril tradition, since during the second quarter of nineteenth century, almost to 1.855, Casariche achieved true celebrity in all the national, since this village raids and espionage center of bandit gangs and thieves who infested the mountains immediate. It is Casariche the “Sale of the Dove” where, to tradition and history, José Mª “The Tempranillo”, beside Juan Caballero and Jose Ruiz “the German”, concluded with General Manso his pardon, signed in the Chapel of the Fuensanta, Corcoya in 1.833.

They are also very important Roman remains, that the people around, have been found petite ceramic, amphorae, tégulas thick and remains of building foundations Roman, than they would be fifth or patrician villas residents. Being of special importance mosaic discovered in the municipality, mythological scene representing the “Judgment of Paris”. The finding is the exponent of the archaeological wealth of the area, manifested in a variety of remains and buildings from different periods that make up a rich historical and cultural heritage. Another highlight are the Roman quarries located in "Cerro Bellido", of which presumably were extracted materials for building a temple in Cordoba.

In Casariche you can taste dishes like cod with onions, chopped oranges with cod or maimones. Regarding pastry highlights ajuelas and Easter donuts. As with all the peoples of the Land of Jose Maria Tempranillo, theolive oil is very much in the popular town cookbook, as well as marinated olives, sausages and pork meats from, theas crumbs or the traditional gazpacho the fucking.

The most important resources are to visit in Casariche :

Church of Our S ª of the Incarnation

See What to visit in a larger map