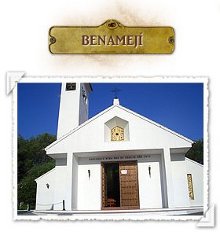 Benamejí The villa is located southwest of the Province of Cordoba, in the limit with the Malaga, and within the region of the SubAndalusian, the Countryside High and the plains of Antequera, where you start the Surco Intrabético. The village is part of The Tiled Benamejí, and the entire municipality has a population of about 5.000 people.

Benamejí is consolidated in the siglo IX when Emir Abd Allah built his fortress called BANU BASHIR, more later fortified by Abd al Rham III. In 1240 Fernando III conquer Benamexir y en 1254 fue donada by Alfonso X the order of Santiago. For two hundred years is the domain sometimes other Christian and Muslim, siendo definitely conquered en 1487 by the Catholic Monarchs. Pope Clement VII to Charles I authorized to sell some properties Benamejí military orders and is sold to the ruler of Burgos, Diego de Bernuy, by 19.905.000 maravedíes, which lifts the new village, Town Charter gives it, distributed land and gives rules for the organization of the town.

The most typical dishes of the people are mainly baton with minced ham and egg, potage accompanied with grits croutons two apes FRITO, stewed potatoes with cod, “picaillo” peppers and grilled sardines, stewed chestnuts, meatballs anchovies and gazpacho chunky cucumber. But surely, fuller menu are the dip, made with orange, cod, hard-boiled egg, onion and olive oil, and the call winter stew, chickpea, boiled eggs and cod with spinach accompaniment. The pork products prominently in the cuisine of Benamejí, and it should be noted the countryside sausage, the black pudding, the morcones, or fillings.

Regarding the baking should be noted traditional donuts andsopaipas for breakfast, and a wide range of sweets for every season: oil cakes, egg bagels, pestiños, etc..

The most important resources are to visit in Benamejí :

Topic Centre of The Duchess of Benamejí

Shrine of Our Lady of Grace

Renaissance on the Genil Bridge

Church of the Immaculate Conception