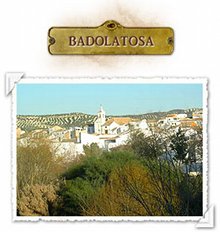 Badolatosa Township spans the easternmost part of the province of Seville. Far from the capital 130 kms. It is 235 meters, a River Genil, outstanding in the field with some consideration that lean towards that river. In the vicinity is the Malpasillo Reservoir, which supplies water to the people.

Badolatosa originated in Roman times as a small village called "Vadus Latus" (Vado Ancho), because at finding the river Genil, called "Singilis" by the Romans. Badolatosa in Roman, for their productive wealth and prime location, served to meet the needs of other major settlements as Ostipo (Steppe), since most of the archaeological remains prove it. In time of the Arabs, also served as a source of supply of other nearby villages, due, specifically, to the great products coming out of their gardens.

The town began its growth from the sixteenth century through agriculture, and continuous growth process lasted until the first half of the nineteenth century, when it reached a population of 2.107 people. Thus, began to develop the structure that currently owns, and which has some 2.800 people.

Badolatosa is connected to Jose Maria El Tempranillo by the Rio Genil, as some historians emphasize the importance of this river as a strategic element in the performance of the bandits. La zona singiliense (by the Roman name of the river Genil, Singilis) is among Badolatosa and Cockaigne, Badolatosa being a strategic point of meeting bandits, not only because it was surrounded by mountains and out of difficult access, but because the Genil river passes through the town center, and forms the natural border between the provinces of Cordoba and Seville. That has led to certain sources (historic and popular) placed to Badolatosa as the headquarters of Tempranillo and his gang.

The cuisine is characterized by Badolatoseña abundance of local produce and pork, being very similar to that of other populations. Typical dishes include the Gazpachuelo, las migas, porridge, the pringá, algamiteña baton, carne sauce the meat slaughter. As for the pastry highlights sopaipas as one of the most traditional breakfasts or snacks Township.

The most important resources are to visit in Badolatosa :

Church of Our S ª del Socorro

See What to visit in a larger map