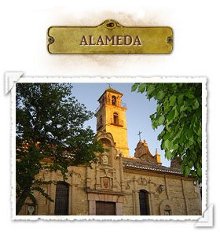 Alameda is located north of the province of Málaga (Spain), in the heart of Andalusia. The township comprises 64 Km2 extension, its elevation above sea level is 425 m., being the peak of the Camorra more substantial height (686 m.) and lower the riverbed Genil (245 m.) north of the term. It has a population of about 5.000 people.

Human presence in the territory of Alameda is very old. Since the period Chalcolithic -about 2.500 – 2.000 BC- havetraces of settlement human, useful although recent findings suggest that we should go back this past further back in time, to Neolithic phases.

The peak period the ancient people came during Roman. We know many details this time thanks to historians and excavations in thermal enclosure and a Roman villa.

In the early years of seventeenth century the people was a stopping point for travelers, privateers, proceedings, galleys and cattle, that night made the trip from Seville to Granada or vice versa. The hosting, especially livestock and agriculture, were the main sources of wealth of its inhabitants. Cereals, the vine and the olive, and to a lesser extent other products, crops were implanted into the lands were gradually breaking, replacing barren field, to scrub and chaparral.

Alameda's cuisine is fully identified with the world of agriculture, with what most typical meals of the area are those that traditionally have fed the people of these villages for many years.

Among the most important meals meet the baton and oil and gaswhile others are characteristic dishes almond sauce and garlic, and Rice with rabbit and hare. Among the homemade desserts are traditional as gruel, the custard and milk pudding. And in baking highlights pestiños, roscos and mostachones, well as traditional sopaipas, made from flour, the Cupcakes and artisanal shortbreads.

Keep in mind that this kitchen has the basic component of olive oil, that is what gives the characteristic taste to the dishes of this land.

The most important resources are visiting in Alameda :

Site of the Silos Chalcolithic Necropolis

Church of the Immaculate Conception